This email address is being protected from spambots. You need JavaScript enabled to view it.

This email address is being protected from spambots. You need JavaScript enabled to view it. 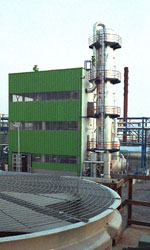 Formaldehyde is one of the most important raw materials in industrial chemistry and is predominantly used in the manufacture of glues and resins. Formaldehyde is usually traded in the form of an aqueous solution with a concentration of about 37%. Formaldehyde is mainly produced by catalytic conversion of gaseous Methanol, either over a Silver Catalyst or a Metal Oxide Catalyst.

MEISSNER offers both processes as well as a series of process variants. The most suitable process is individually chosen according to customer-specific requirements, such as product qualities to be met or prevailing infrastructural conditions.

With the classic MEISSNER variant of the Silver Catalyst process, pure Methanol is fed to the catalyst. Together with the unconverted Methanol, the generated Formaldehyde is washed out of the gaseous phase in an absorption unit by means of water. In order to adjust the Methanol content to the desired value, the obtained raw solution is subjected to a distillation step, and the separated Methanol is returned into the process. Formaldehyde solutions of about 50-55% concentration with less than 1% of residual Methanol can be produced with this process.

In another MEISSNER process variant, Methanol is fed to the Silver Catalyst together with water. The admixture of water enables an enhanced conversion of Methanol. Therefore, the Formaldehyde solution of about 40-44% concentration obtained in the absorption unit only contains 3-5% of residual Methanol without any distillation step - favourable in terms of both capital investment and operating costs.

For the MEISSNER Metal Oxide Catalyst process, a Methanol lean mixture is fed to the catalyst. As this allows an almost complete conversion of the Methanol, Formaldehyde solutions of about 50-55% concentration with a content of less than 1% of residual Methanol can be produced without any distillation. Besides very favourable consumption figures for Methanol, this process offers the further advantage that the reaction heat is utilized for the generation of steam, which is then available for external consumers. A process variant works with tail gas recycling, which allows a capacity increase with unaltered dimensions of the main plant components. 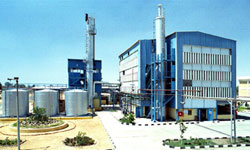 Urea-Formaldehyde Precondensate (UFC) is a low-molecular polycondensation product of Urea and Formaldehyde dissolved in water, which is used in the glue and resin industry as an intermediate product for glues in the manufacture of particle board, or as anti-caking additive in Urea production. 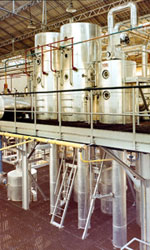 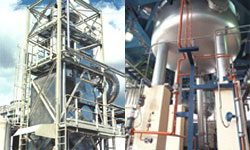 Hexamethylenetetramine (Hexamine) is a crystalline, solid material, which is produced starting from Formaldehyde and Ammonia and which is mainly used in the resin and rubber industry.

According to the MEISSNER process, both starting materials are introduced in gaseous state into a liquid reaction phase where the formation of Hexamine takes place. Absorption and reaction of the gases as well as Hexamine crystallisation take place in the same specially designed reactor. The MEISSNER process features highly favourable consumption figures. 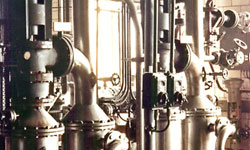 In contrast to conventional batch processes, the process offered by MEISSNER is a fully continuous one allowing precise control of the reaction conditions in the synthesis section. This enables, for example, adjustment of the amount of Di-Pentaerythritol - a valuable by-product - in the synthesis solution.

By employing Soda Lye as catalyst, and by carrying out the individual partial reactions in separate and specially designed reactors, the formation of undesired by-products is minimised. Thanks to this, and by using a continuously operated crystallisation section for product separation which works extremely efficiently due to a cleverly devised internal recycling, very favourable consumption figures and excellent product qualities can be achieved. 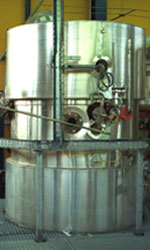 Like Formaldehyde, Acetaldehyde is a very important raw material in industrial chemistry. Despite its high volatility, Acetaldehyde is produced as pure liquid, yet favourably as close as possible to the place of consumption. An important method of manufacture is the catalytic conversion of gaseous Ethanol.

Analogously to the Formaldehyde process, the MEISSNER process for the production of Acetaldehyde works with a Silver Catalyst for conversion of the Ethanol. The intermediate absorption of the generated Acetaldehyde in water is followed by a  separation of the Acetaldehyde from the raw product by means of a first distillation step. The recovery of the unconverted Ethanol in a further distillation step enables very favourable raw material consumption figures to be achieved.